In the last edition of Lara’s Travels, we looked at the real and in-game Tomb of Semerkhet in Egypt. This time, we will be leaving the scorching deserts of Egypt behind us and will be turning our attention to a remote, volcanic island in the Arctic Ocean: Jan Mayen.

Lara travels to Jan Mayen in Tomb Raider: Underworld in search of Valhalla and Thor’s legendary hammer, Mjölnir, in order to put an end to Natla’s plans to bring about the “Seventh Age” (thought to be the Ragnarök of Norse myth).

The game depicts the island as a windswept, icy wilderness and, in some respects, this isn’t an inaccurate description. The northern part of the island, Nord-Jan, is largely covered by glaciers and is dominated by the ice-capped stratovolcano Beerenberg while the south, Sør-Jan, is unglaciated with beaches of black volcanic sand and characterised by steep cliffs, which are the perfect nesting grounds for auks, puffins, gulls and other sea birds. In fact, most of the island is a protected nature reserve. The island and its waters are home to a number of different species, including snowy owls, hooded seals, blue whales, and the aforementioned sea birds.

Jan Mayen is currently home to a small team of military personnel, meteorologists, engineers, and support staff who all live in the island’s only settlement, Olonkinbyen, and man the island’s weather station and LORAN-C base. Life on Jan Mayen can be quite lonely. Flight connections between the island and mainland Norway are highly dependent on the weather and the frequent strong winds, cloud cover, and long winter nights make it a fairly gloomy place to live. It’s not hard to see why Crystal Dynamics chose this remote and underpopulated place as the setting for their Valhalla. 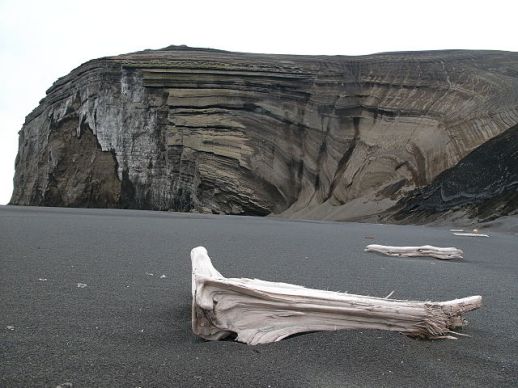 The first verified discovery of Jan Mayen was in 1614 but some historians believe that the earliest accounts of the island may date as far back as the early sixth century. The Irish monk and sailor Saint Brendan of Clonfert once wrote about a black island that was on fire and likened it to entrance to Hell. Is it possible that he had witnessed an eruption on Jan Mayen?

The island may also have been known to the Vikings but there is no evidence to suggest that they had ever tried to establish a settlement there. It wasn’t until the 17th century that people began to explore and settle on the island. Three separate Dutch whaling expeditions established themselves in the area in 1614, though the island was eventually named after the seafarer Jan Jacobszoon May van Schellinkhout, captain of one of the Noordsche Compagnie’s ships, the Gouden Cath.

Jan Mayen was used as a whaling base by the Dutch between 1615 and 1638, though most of their storage facilities, forts and whaling stations were destroyed by Basque whalers in 1632 as a result of a dispute between the disgruntled whalers and the Noordsche Compagnie. By the late 1630s, the local whale population was hunted to near extinction so the Dutch whalers abandoned the island and Jan Mayen remained uninhabited for another two and a half centuries.

In the late nineteenth and early twentieth centuries, the island was mapped by an Austro-Hungarian polar expedition and then exploited as a hunting ground by Norwegian hunters. Then in 1921, the League of Nations awarded jurisdiction of the island to Norway. Jan Mayen was formally made part of the Kingdom of Norway in 1930 and all German attempts to capture the island during the Second World War proved unsuccessful. Debris from the German war planes, whale bones, and the abandoned whaling stations dotted around the southern half of the island are testament to Jan Mayen’s recent history.

Anyone thinking of booking a last-minute trip to Jan Mayen will be sorely disappointed. All visits to the island must first be approved by either the station commander or the Norwegian police – which can take days or even weeks – and foreign visitors need to apply for special permits since the island is still technically a military installation. Visitors are often advised to carry arms in case of a possible polar bear attack and are forbidden from removing anything from the island unless it’s for approved scientific research. Lara would have had a hard time convincing officials that she was simply there for a sightseeing visit and the lack of proper roads on Jan Mayen would have made it impractical for her to explore the island by motorbike.

Flights to Jan Mayen are few and far between so most visitors arrive there by ship. Some cruise companies offer tours to Jan Mayen but, on the whole, the island receives very few tourists so there are no hotels or other tourist facilities to cater for them. It is, however, an excellent place for adventure holidays or mountaineers looking for something a little less ordinary.

If you’re looking to travel to the ends of the earth, Jan Mayen would almost fit the bill. Just don’t expect to find any long-lost Norse treasures there.

All articles on this site were written by Kelly McGuire unless stated otherwise. Please ask for the author’s permission before republishing or translating any of the articles found on this site and make sure to link back to the original article.