Ever since the “End of the Beginning” trailer made its public debut on April 27, cosplayers around the world have been begging for reference pictures of Lara Croft’s Shadow of the Tomb Raider outfit. And with E3 and Gamescom just around the corner, co-developer Crystal Dynamics decided to lend cosplayers a helping hand by publishing a comprehensive guide to Lara’s brand new outfit and equipment. Crystal Dynamics published a whole series of gear guides for Rise of the ... [Continue Reading]

October 2016 was an insanely busy month for Ms Croft. Not only did Rise of the Tomb Raider: 20 Year Celebration finally land on Playstation 4, it was also the 20th anniversary of Tomb Raider (1996), the game that launched Lara Croft into superstardom. And if that wasn’t enough, our fictional heroine was also awarded two new Guinness World Records: “Largest Gathering of People Dressed as Lara Croft” and “Most Magazine Covers for a Video Game Character”. ... [Continue Reading]

Back in December 2015, Crystal Dynamics launched a series of “Gear Up Guides” aimed at cosplayers, fan artists, and other creative types. The guides consist of several high-res shots of Lara’s outfits and gear and include notes from Rise of the Tomb Raider’s Art Director, Brenoch Adams. For the benefit of aspiring cosplayers, I’ve added links to cosplay tutorials and videos where possible. Don’t forget that a wealth of information, reference pictures, ... [Continue Reading] 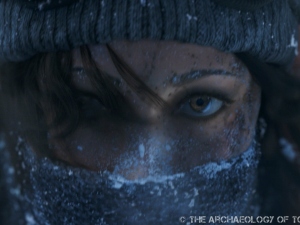 Update: Crystal Dynamics have posted a full event guide on the official Tomb Raider blog. Head on over there to find out what Comic-Con attendees can look forward to and how you can win a Rise of the Tomb Raider-branded Xbox One (open to US residents only). Planning on attending this year’s San Diego Comic-Con? If so, make sure you jot down 11th July 2015 in your diary as it’s going to be one heck of a Tomb Raider extravaganza! The day’s activities will kick off at 10:00 ... [Continue Reading] 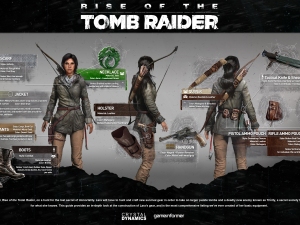 Game Informer’s recently-published Rise of the Tomb Raider Gear Guide has undoubtedly put a smile on the faces of countless Tomb Raider cosplayers and presented them with the challenge of finding (or crafting) Lara’s new outfit and gear in time for the next convention or fan meet-up. UPDATE: If you’d like to create your own Rise of the Tomb Raider costume, visit LaraCroftCosplay.Com for cosplay tips and tutorials! The guide was created in collaboration with Crystal ... [Continue Reading] 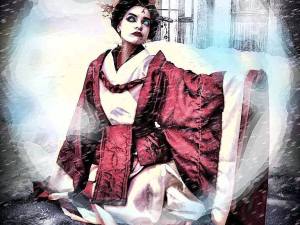 When rumours of a new Tomb Raider film failed to come to fruition, fans wasted no time filling in the void in their fandom. Last year, we were treated to Croft, a 20-minute film shot in British Columbia, Canada, and starring Cassandra Ebner. And now there’s another fan-produced film on the horizon: Hunted. Hunted is the brainchild of a group of talented actors, artists, and writers and is based on the hugely successful Tomb Raider 2013. Written by Kate Sykes and directed by Josh Pate, ... [Continue Reading]

This week’s fan interview turns the spotlight on one of my favourite Tomb Raider fan fiction writers and cosplayers. Say “hello” to Noelle, aka Pfangirl! So, tell us a little about yourself. I’m Noelle Adams, a professional writer, blogger and cartoonist living in Durban, South Africa. I’m 32 years old and I currently work full-time as a copywriter in the advertising industry. My interests are pretty diverse (I’m a Brazilian Jiu-Jitsu purple belt) but I’ve always ... [Continue Reading]

I hope you’re all enjoying my series of fan interviews so far! In the spotlight today is Helen J, a researcher, cosplayer and full-time Tomb Raider fangirl from England. Here’s what she has to say about archaeology, Lara Croft, and costume making. So, tell us a little about yourself. My name is Helen and I am a graduate from the longest degree name in history, MA Geographies of Globalisation and Development (Research Methodologies), an aspiring researcher, part-time costume maker ... [Continue Reading]