The last two editions of Arte-Factual dealt with the art and archaeology of the very first Tomb Raider game. In this latest edition, I’ll be writing about one of the many collectable relics Lara comes across in the 2013 reboot: a Ban Chiang vase. We don’t really know how this ancient vase ended up on the island but Lara correctly identifies it as being from Thailand. Perhaps she had seen a similar vase in a museum or had visited the Ban Chiang archaeological site in ... [Continue Reading]

In the last edition of Arte-Factual, I looked at the Toltec Atlantes pillars that could be found in and around Qualopec’s tomb in the original Tomb Raider. In this edition, I will re-visit Qualopec’s tomb and examine another Pre-Columbian motif that can be seen on the walls of the fictional Atlantean king’s tomb: a Chimú bird carving. When the first Tomb Raider came out, I was studying Peruvian pottery and iconography as part of a GCSE art project, so I got some pleasure ... [Continue Reading]

Sharp-eyed gamers may have noticed that the same colossal sculptures appear repeatedly throughout the Peruvian levels of the original Tomb Raider (1996), most notably in the Tomb of Qualopec. These sculptures are, in fact, based on the real-life Atlantes, or Atlantean pillars, found at Tula, a Postclassic archaeological site in the Mexican state of Hidalgo.** The four Atlantes of Tula are basalt pillars carved in the form of Toltec warriors and are thought to have once supported the roof of ... [Continue Reading] 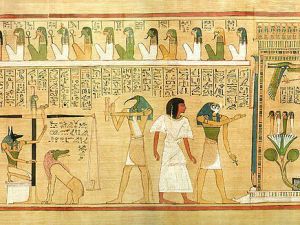 Have you ever wondered what it would be like to study Egyptology at university? If so, check out Gemma Smith’s article about her experiences as a student of Egyptology at Swansea University! This article was originally published on the Independent’s website as part of its 2012 Fresher’s Guide and is full of practical advice for budding Egyptologists. A short excerpt can be found below: “If you had asked me on A Level results day “Where do you see yourself in ten ... [Continue Reading]

On 24th July 1911, the Yale archaeologist and intrepid explorer Hiram Bingham III caught his first glimpse of the remote Inca citadel of Machu Picchu during an expedition to find the lost city of Vilcabamba, the last refuge of the beleaguered Inca Empire. Although it’s now thought that the site had been visited (and plundered) by others before him, Bingham is credited with bringing Machu Picchu to the world’s attention. Over the years that followed, however, thousands of artefacts ... [Continue Reading]

In his article Romancing the Stones: Archaeology in Popular Cinema, historian Mark A. Hall looks at how archaeology and archaeologists are depicted in popular cinema and considers how the recurring themes of cultural appropriation, cultural imperialism, and emphasis on “treasured objects” create a somewhat skewed and negative view of the profession. Among the films examined are the original Indiana Jones trilogy, the Mummy film series, and, of course, the two Tomb Raider films. Ms ... [Continue Reading]

Which Tomb Raider location would you visit if you had the money and means to explore any of the places featured in the games, films, or comics? Would you visit the stunning temples of Angkor, explore the frozen expanses of Antarctica, wander through the urban wildernesses of London and Tokyo, or do a spot of mountain climbing in Peru? Feel free to let us know what is on your Tomb Raidertravel wishlist by leaving your comments below! You can learn more about the places Lara Croft has visited ... [Continue Reading]

Have you ever had the urge to follow in Lara’s footsteps and learn to read Egyptian hieroglyphs? If so, you may be interested to know that there are a number of useful, free online resources at your disposal. These, if used in combination with a good textbook such as James P. Allen’s Middle Egyptian: An Introduction to the Language and Culture of Hieroglyphs (Buy it on Amazon/Amazon UK) or Mark Collier and Bill Manley’s How to Read Egyptian Hieroglyphs (Buy it on ... [Continue Reading]

Queen Himiko (卑弥呼) and her kingdom, Yamatai (or  Yamatai-koku) (邪馬台国), play a central role in Tomb Raider 2013. But did you know that in February 2013, a group of researchers were granted access to a burial mound in Sakurai (桜井), Nara Prefecture, Japan, which may be the actual final resting place of this mysterious queen? The location of Yamatai-koku is a subject of intense debate within Japanese archaeological circles. Some believe that it was located as far south as Okinawa ... [Continue Reading]