I’ve been a huge fan of Funko’s uber-cute aesthetic ever since a friend of mine introduced me to their range of Pop! vinyl figures a couple of years ago. What began as a one-off acquisition (a Scarlet Witch Pop! I received from said friend) has since grown into an eclectic collection of superhero and Star Wars figures.

So when Funko announced that they were releasing a Lara Croft Pop! figure to celebrate the 20th anniversary of the Tomb Raider franchise, I just couldn’t help myself.

Funko’s Pop! range isn’t for everyone. The figures’ oversized heads, tiny bodies, and huge round eyes won’t appeal to everyone but they’re generally well made and – more importantly – affordable. As much as I’d love to add Gaming Heads’ breathtaking Lara Croft statues to my collection, I can’t justify spending hundreds of dollars on one statue.

So let’s talk about the Lara Croft Pop! figure.

First of all, I’m glad that Funko chose “Classic” Lara for the basis of their Pop! figure. Given that the franchise celebrated its 20th anniversary last autumn, it would have been wrong to go with any other look. That said, I hope Funko expands its range of Lara Croft Pop! figures in future. What I wouldn’t give to own a Tibet Bomber Jacket Lara Pop… 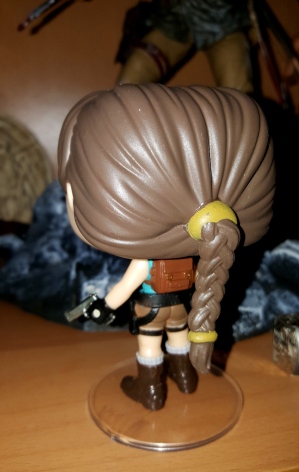 Strictly speaking, this figure may actually have been modelled after the Lara Croft from Tomb Raider: Anniversary. Her tank top has a ribbed texture and her hair is tied up in her signature braid (not the bun we see in much of the 1996 game), but let’s not get bogged down in details.

The paintwork is, for the most part, spot on. This may vary from figure to figure but you may spot the odd smudge or blotch here and there. While Lara survived her long journey across the Atlantic unscathed, a close inspection of the figure shows a few stray brushstrokes along her hairline and belt. Nothing too distracting, thankfully.

My only major complaint is with the clear, round base that came with the figure. The figure can balance on its feet without toppling over at the slightest touch (something that can’t be said for some of the other Pop! figures I own) but if you choose to use the supplied base, you may have trouble slotting the peg into the too-small hole on the underside of Lara’s boot. You’ll need to apply a bit of pressure to get the job done but take care not to overdo it or you’ll risk breaking the peg and/or Lara’s leg.

And that’s about all I can say about the figure, really. Aside from a couple of minor flaws, the Pop! figure is great value for money and has quickly become one of my favourite pieces of Tomb Raider merchandise. ^_^

Order your very own Lara Croft Funko Pop! figure over on Amazon or Amazon UK.