In the 2006 game Tomb Raider: Legend, Lara Croft travels across the globe in search of pieces of the mythical Excalibur, visiting such places as a military base in Kazakhstan, the ruins of Tiwanaku in Bolivia, an ancient temple in the Ghanaian rainforest, and an abandoned monastery in Nepal.

But did you know that the West African nation of Mali was almost a stop on Lara’s grand tour?

Perusing my archive of Legend concept art recently, I spotted two pieces of artwork that seemed to depict a small alley and market place around what appeared to be the Great Mosque of Djenné in central Mali.

I was already familiar with this World Heritage Site as I’d read about it for a course on West African archaeology a few years ago and had seen videos of the mosque’s annual maintenance on YouTube. Honestly, it’s amazing to watch the local community in action. But I’d completely missed the fact that it probably served as the inspiration for Joel Boucquemont’s concept art… 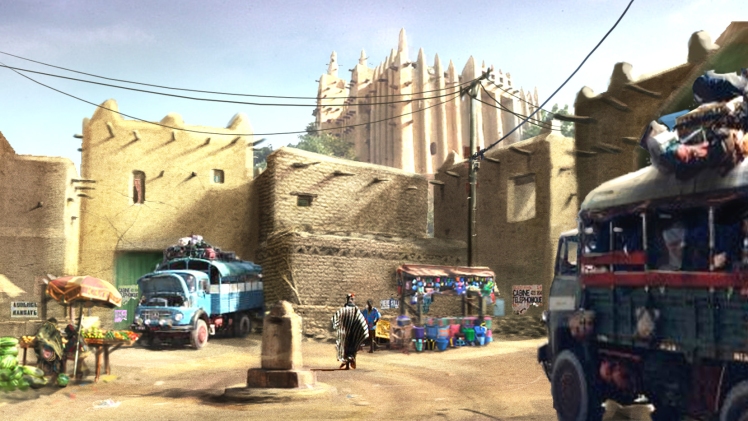 The Great Mosque of Djenné has served as the town’s spiritual and cultural hub for centuries, most notably as a centre for Islamic scholarship during the 15th and 16th centuries, and is considered by many to be the pinnacle of Sudano-Sahelian architecture.

And while this picturesque mosque has become one of the most recognizable heritage sites in Africa, the current structure actually only dates back to the early 20th century. In 1906, the French colonial administration ordered the construction of the Great Mosque on the site of the original mosque, which had been commissioned by the king Koi Konboro, Djenné’s first Islamic king, in 1280.

Similar structures can be found in Ghana (e.g. Larabanga Mosque) and neighbouring countries but the use of French in the concept art (“Cabine telephonique”) suggests that this particular alley would have been in the Francophone Mali and not the Anglophone Ghana. Not to mention the concept art structure’s uncanny resemblance to the Djenné mosque.

Looking at Boucquemont’s art, it’s clear he must have done some research into the architectural style of the region. The two-storey mud-brick and adobe buildings seen in the concept art are reminiscent of those found in Djenné’s historic centre, complete with their decorative façades and jutting palm-wood beams (which can be used as built-in scaffolding when needed).

It isn’t entirely clear whether Mali was ever meant to be a level in the game or whether it was simply an idea that never made it past the conceptual art stage. Perhaps Crystal Dynamics chose to send Lara to Ghana instead.

Whatever the reason, I’ve got to admit I’m a little disappointed we didn’t get to explore the centuries-old alleys and landmarks of this Malian town.

On a more serious note, I’d like to point out that I feel a bit awkward making jokes about Lara visiting the ancient sites of Mali as her archaeological methods leave a lot to be desired, not to mention the fact that a number of the country’s historical sites have been destroyed or damaged by extremist groups in recent years.

The wanton destruction of ancient artefacts and sites is all part of the Tomb Raider experience but it should go without saying that the destruction of cultural heritage is a serious crime in the real world.

If you’d like to learn a little more about Mali and its rich past, visit the links below:

If you prefer books, here are a couple of recommendations:

Tomb Raider Tidbit is a series of articles devoted to random Tomb Raider-related trivia and other observances.

You can find an archive of past editions over here.