There have been times where I’ve come across an object in a Tomb Raider game that caught my eye but didn’t write an article about it because it didn’t quite fit the scope of my Arte-Factual series. So to remedy this, I’ve decided to launch a new series that will tackle anything that either doesn’t warrant a full in-depth feature or simply doesn’t fit neatly under any of the site’s existing series.

The subject of this very first edition of “Tomb Raider Tidbits” is Lord Richard Croft’s book, Truth Behind Myth, which makes a few brief appearances in a number of cut scenes early in the game.

Spoiler Warning: While this fictional book makes a couple of appearances in Rise of the Tomb Raider, we know practically nothing about its contents and it isn’t central to the game’s plot. This article is completely spoiler-free so feel free to keep scrolling down even if you’re still waiting to play the game for yourself.

Now, onto the book itself…

The contents of Lord Croft’s academic tome are largely unknown but a detailed reproduction of the book’s dust jacket (designed by Senior Artist Jeff Adams) can be found in Rise of the Tomb Raider: The Official Art Book.

The text’s a little blurry in the photo (my apologies) so here’s the blurb and quotes in full:

Richard Croft explores myth in search of lost truths within Christianity. The word myth rests on a historical basis. By the time of Christ, the Greco-Roman world had started to use the term myth (Greek muthos) to mean “fable, fiction, lie”; as a result, the early Christian theologians used “myth” in this sense. Thus, the derogatory meaning of the word “myth” is the traditional Christian meaning, and the expression “Christian mythology”, as used in academic discourse, may offend Christians for this reason.

However, the thing that really caught my attention was the cover photo. While it’s clearly supposed to be a photo of Lord Croft (and an unknown assistant) at Angkor Wat, it seems that it’s modelled after a real-life photo of the American explorer and academic Hiram Bingham, who is best known for “discovering” the ruins of Machu Picchu in 1911.

More specifically, on the cover of the 2003 Phoenix Press edition of Bingham’s travelogue, Lost City of the Incas.  Even the publishers’ logos look strikingly similar… 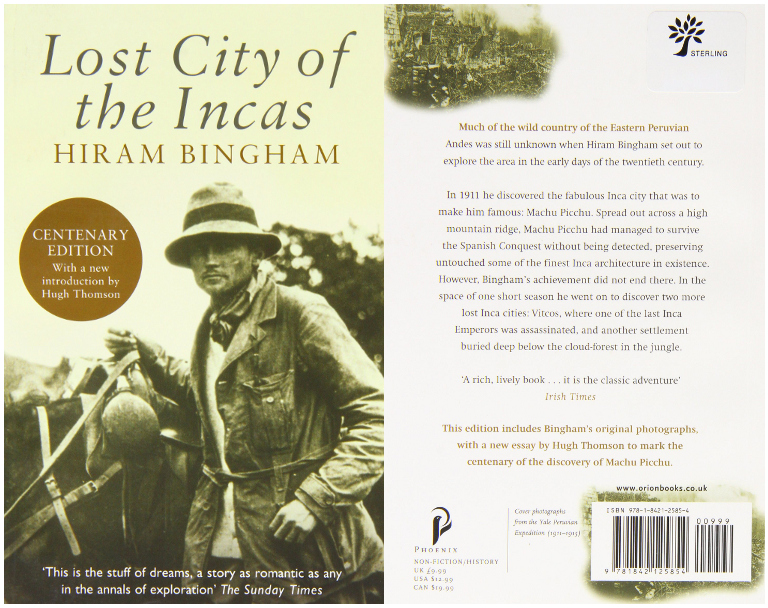 This incredible attention to detail in a seemingly insignificant and rarely-seen prop clearly demonstrates the art team’s dedication to crafting a plausible, realistic in-game environment that the gamer can lose themselves in.

Sadly, the contents of Lord Croft’s book will continue to remain a mystery for now…

If you enjoyed this Tomb Raider Tidbit, you’ll definitely enjoy the many works of concept art, storyboards, and sketches that can be found in Rise of the Tomb Raider: The Official Art Book. Why not treat yourself and order a copy today via Amazon or Amazon UK?