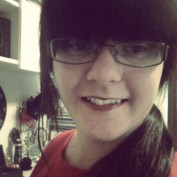 My name is Sinead (also known as SineadCroft), I’m 20 and I live in Western Australia. I was previously a student studying law and have two certificates in the subject. I am currently working part-time.

I’ve always had a creative mind, especially when I was a child, so gaming and entertainment was the obvious hobby when I was introduced to it as a child! I love video games and my favourite video game series is, of course, Tomb Raider. 😉

I was relatively quite young when I first discovered Lara. I was about four years old, and my dad bought a PlayStation One. One of the games that came with the PlayStation was Tomb Raider 3. I watched my dad play it for a while and became hooked as I loved that there was a main female character just kicking butt! My dad soon allowed me to play, but I was only restricted to playing Lara’s House as I was so young. I fell in love with Lara and her creepy farting butler right away! Dad eventually let me play the main levels and I loved it! I struggled with the difficulty, but being a child I was so thrilled with the idea of being able to play a strong woman character, so the hard difficulty of TR3 in the end, did not bother me!

I run a blog on Tumblr called Lara’s Tomb. It’s been really cool to share my love of the series with other fans through Tumblr. I also moderate Katie’s Tomb Raider Forum. It’s a very small community but it’s friendly and the members on there are all very lovely people, so I love moderating it. My biggest achievement so far would probably have to be when I took part of Extra Life in 2013 and joined Team Tomb Raider Community help raise money for Children’s Hospitals. It felt amazing to take part in a charitable event through my love, and other people’s love of Tomb Raider. It was simply amazing.

Tomb Raider has changed my life in many ways! Tomb Raider 3 was my first gaming experience, so if I hadn’t have gotten into Tomb Raider, I wouldn’t be gaming today! As a child, I always aspired to be like Lara, strong, independent and intelligent. So she was quite a role model growing up and still is now.

As a child, I never really understood why Lara was posed in bikinis on TV and magazine advertisements. For me, playing that game, she didn’t seem like the type of character to be posing in a bikini. So it did confuse me a little. When I was a child, I saw her as a positive icon, despite the ‘sexy’ advertisements. I just loved that she wasn’t a Princess Peach or Princess Zelda, who were constantly getting rescued by the lead male. If anyone did the rescuing, it was Lara.

Looking back at Lara’s image, particularly in the 90’s, I now find the advertisements deceiving and strangely funny because Lara never used her body to get what she wanted. She used her strength, wit and intelligence and I think that’s why she kind of stood out to me, and still stands out to me in the female protagonist market in gaming. It’s great to see how Lara’s image in the series has developed throughout the years now and I think it’s great that young girls will be able to look up to TR 2013 Lara without the body image issue being a factor, even though it wasn’t a factor to me as a young girl.

I’m a bit biased, as it’s Tomb Raider 3. It was my first Tomb Raider and gaming experience and introduced me to Lara’s crazy but fun adventures. It also has a wide variety of locations to explore and fun vehicles to drive or use. I must admit though, the canoe controls still drive me crazy, but there’s still fun to be had making Lara float through the depths of the South Pacific!

My least favourite game would have to be Tomb Raider: Legend. I was twelve when I first played it and managed to pass it in one sitting! For me, that is way too short and easy for a Tomb Raider game. It was fun though. Plus those motorcycle sections always bug me. They’re so repetitive!

Classic Lara all the way! I love all of them though, but classic Lara stands out the most to me as the only thing she really was passionate about was raiding tombs. I also loved her no nonsense attitude. But I do love how geeky Reboot Lara sounded when discovering ruins in TR 2013.

I have a lot so I’ll try and shorten it! My favourite moment would have to be discovering that there were aliens in Area 51. I thought it was cool and still think it’s cool! Plus swimming in the tank with whales was so cool. I’ll never get how that tank didn’t burst open, though. Alien technology?

My favourite quote will always be “I make my own luck” from The Last Revelation.

I wasn’t so sold how Lara had romantic interest in the films. For me, Lara is an independent person who loves and is committed to her work and has no time for a relationship. I also didn’t like how Lara was ‘killed’ in The Last Revelation. I also wasn’t really a fan of L/A/U Lara’s background and how her parents were a large part of her passion. I much rather preferred the Core Design bio where she was pretty much the outcast of her family and did not have many interactions with her parents. I also have a problem with the parental influence Lara has in TR 2013, but I thought it was better written than L/A/U Lara’s background.

I also disliked all of the QTEs in Anniversary, particularly the ones where Lara is fighting Pierre, Larson and Natla’s goons. It felt all too dramatic. I would rather just have rather long shootouts like in the original instead of killing them via QTE.

Hmmm, now this is a tough one! If I could change any of the newer games, it would probably ensure that there were more challenging tombs and challenging exploration. That’s what I loved so much about the classics, so it would be great to see that represented in the new games.

Australia! I would totally freak out if Lara were exploring ruins over here in the desert! We have so much culture that not many people are educated about around the world, so it would also be awesome for other players to experience Australian history. But if Lara were travelling to Australia in one of the games, I would be emailing Crystal Dynamics and begging them to hire Australian voices actors. Americans just cannot do the accent justice without making it sound clichéd.

It would definitely be Egypt. There’s just so much history in Ancient Egyptian ruins and so much to explore!

A huge thanks to Sinead for taking part in our series of fan interviews. You can follow Sinead on Twitter at @SineadCroft1 or visit her Tumblr blog, Lara’s Tomb.

All of our fan interviews can be found here.