In Tomb Raider 2013, Lara and the rest of the Endurance crew set out to look for the lost kingdom of Yamatai and its mysterious queen, Himiko, but, in reality, Japanese archaeologists have known the possible location of Himiko’s tomb for a few years now.

Long-time readers of this blog may recall that a group of researchers were allowed access to the Hashihaka kofun burial mound earlier this year in the hope that they’d be able to confirm whether the tomb in Sakurai, Nara Prefecture, was indeed Himiko’s final resting place. The radiocarbon dating of clay pots found in a moat surrounding the keyhole-shaped mound had confirmed that the tomb dates back to the mid 3rd century AD (Himiko is thought to have passed away in 248 AD) but further study will be needed to confirm the identity of the tomb’s occupant.

So, if archaeologists already know where Himiko might be buried, why haven’t they excavated her tomb yet? 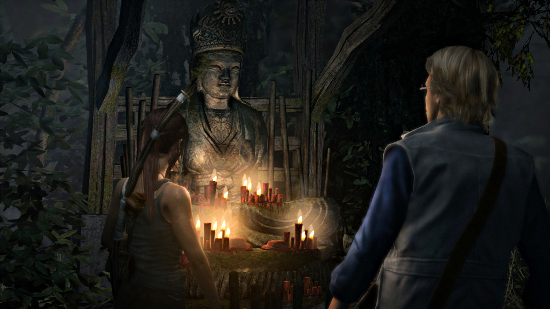 Lara and Dr Whitman search for the tomb of the Sun Queen, Himiko (Image credit: The Average Gamer)

The answer is fairly straightforward: The tombs of ancient emperors and empresses are strictly monitored by Japan’s Imperial Household Agency and archaeologists are rarely permitted to conduct research excavations at imperial burial sites for fear of damaging the ancient structures. Excavating a burial mound, especially one that may have escaped the attention of tomb robbers, would be akin to desecrating the remains of an honoured ancestor. In this case, possibly even a direct ancestor of the reigning Japanese emperor, Akihito (明仁).**

Although a team of 16 archaeologists was allowed to conduct an on-site inspection of the Hashihaka burial mound in February, they were banned from conducting any excavations or taking any soil samples from the site. It’s not known how much the archaeologists were able to learn during their visit but it’s unlikely that the Imperial Household Agency will be approving any requests for formal excavations any time soon.

Even if the Imperial Household Agency were to allow archaeologists to excavate the mound, there are other factors to consider. Excavation is an expensive, intrusive, destructive and irreversible process. Archaeologists are therefore under pressure to record as much as possible for posterity since an archaeological site can only be excavated once. Any information missed in the initial excavation will be lost forever. Only non-invasive procedures have been used to study the Hashihaka tomb so far but none of these can really tell us if the person buried inside (if there *is* a body inside) is Queen Himiko.

There is also the fear that precious artefacts could be damaged, even destroyed, if they are removed from the site. This fear is justified. Chinese archaeologists excavated a Ming Dynasty tomb in haste in the 1950s but they had neither the resources nor the expertise to store and preserve the excavated artefacts, which included porcelain and a large amount of silk and other textiles. Many of these have been irreparably damaged due to prolonged exposure to wind and water in a damp store room. Similarly, there are accounts of centuries-old silk articles disintegrating within minutes of their exposure to oxygen.

As a result, archaeologists often prefer not to excavate a site if they lack the means, storage facilities and/or or money to adequately protect and preserve the site and excavated artefacts.

One archaeologist at Okayama University (岡山大学) is working hard to educate the public and fellow archaeologists (and perhaps even the Imperial Household Agency) on how archaeological discoveries are made and what techniques and technologies are used for studying archaeological sites. Professor Matsugi Takehiko (松木武彦) has recently published a book, “Unlooted and Imperial Kofun Burial Mounds” (未盗掘古墳と天皇陵古墳), which discusses how archaeologists approach preservation and describes the painstaking methods he used to excavate two unlooted imperial burial mounds.

He hopes that his book will help pave the way for a better understanding of archaeological excavation among the general public and help establish a proper system for excavating and preserving the few remaining intact burial mounds so that archaeologists can get a better insight into Japan’s early history.

For now, however, the fate of the Hashihaka burial mound remains in the hands of the Imperial Household Agency. Will we ever find out whether or not Himiko was buried at the site in Sakurai? Only time will tell…

** It’s worth mentioning here that some archaeologists believe that Himiko’s clan may have originally come to Japan via the Korean peninsula and that the Hashihaka kofun tomb and similar burial mounds could prove (or disprove) this theory. Although excavations of kofun tombs could yield a wealth of information on early Japanese history and state formation, the possibility that the Japanese imperial family may be descended from Korean royalty rather than the legendary Japanese Emperor Jimmu (神武天皇) is a politically sensitive topic and some speculate that this may be the reason why the Imperial Household Agency bans archaeologists from excavating imperial burial sites.

2 Comments on The Hunt for Himiko: Will Archaeologists Ever Excavate the Hashihaka Tomb?