In the last edition of Arte-Factual, I looked at the Toltec Atlantes pillars that could be found in and around Qualopec’s tomb in the original Tomb Raider.

In this edition, I will re-visit Qualopec’s tomb and examine another Pre-Columbian motif that can be seen on the walls of the fictional Atlantean king’s tomb: a Chimú bird carving. 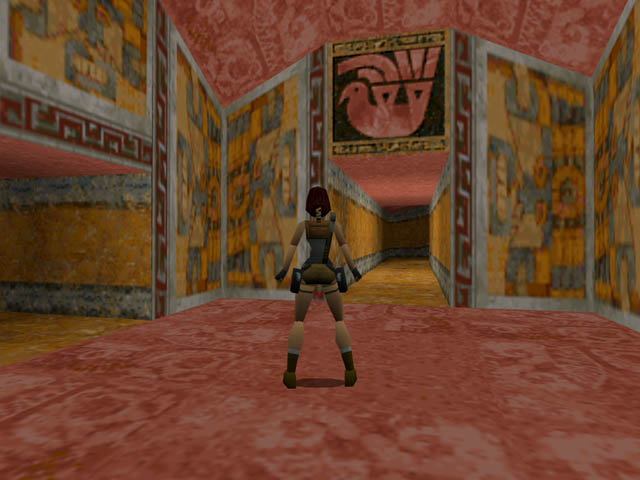 When the first Tomb Raider came out, I was studying Peruvian pottery and iconography as part of a GCSE art project, so I got some pleasure out of spotting real-life artefacts and imagery whilst I guided Ms Croft through the first few levels of the game. One of the motifs I recognized from my books was the bird motif seen in the screenshot above. The motif is most likely based on a series of friezes that adorn the walls of a citadel at the Chan Chan archaeological site near the city of Trujillo in northern Peru.

Constructed in the mid-ninth century AD and covering a total area of around 20 square kilometres, Chan Chan is the largest adobe settlement in the world and was the capital of Chimor, the kingdom of the Chimú people. The Chimú are thought to be descendants of the Moche, who once occupied north-western Peru from about 100 AD to 800 AD and are renowned for their ceramic art and complex irrigation systems. Like their predecessors, the Chimú produced beautiful pottery, metalwork and textiles and developed a vast network of canals to supply Chan Chan and the surrounding farmland with much-needed water. They worshipped the moon, believing that it controlled the weather and growth in crops and, in sharp contrast to the Inca, saw the sun as a powerful, destructive force.

Due to its proximity to the Pacific Ocean, Chan Chan had a thriving fishing industry so it is perhaps unsurprising that the walls of the site’s ten ciudadelas (or citadels) and other buildings are adorned with stylized carvings of sea birds, fish, crabs, turtles, fishing nets, and other marine imagery. I’ve been unable to determine the species featured in the motif but it may be a pelican or possibly even a vulture or parrot. If anyone knows what it’s supposed to be, please let me know. 😉

The same bird motif can be seen on several walls at the Chan Chan site
(Photo credit: Wikimedia Commons)

Unfortunately, the Chan Chan ruins are slowly being eroded as a result of changing weather patterns in the region and earthquakes have damaged a number of centuries-old adobe structures. Furthermore, much of the site has been plundered by grave robbers, or huaqueros, in their search for marketable antiquities, despite the local government’s best efforts to curb the trade in illicit antiquities. It is therefore impossible to know how much of Chan Chan’s history has been lost in the quest for gold and other treasures and it remains to be seen whether the site will survive into the next century in spite of the aforementioned natural and man-made threats.

If you’d like to learn more about Chan Chan and the Chimú, these books and websites are a great place to start: